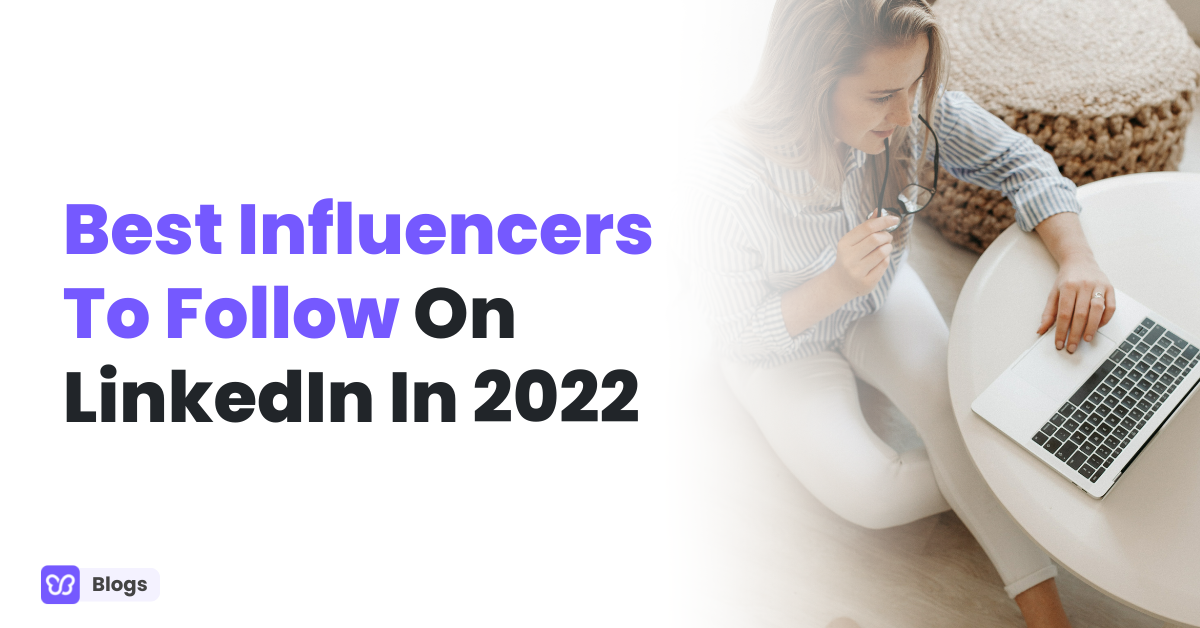 When you hear the word "LinkedIn," what comes to mind? Probably jobs, networking, recruiters, companies, and the likes...

But what if I tell you influencers also exist on LinkedIn? They do. Influencers don't just exist on Instagram or TikTok, where they post travel and lifestyle content.

People on LinkedIn will give you a goldmine of new information on how to run your business and be great at your job.

If you're already curious... let me give you a glimpse of what this blog covers:

What are LinkedIn influencers?

Since LinkedIn is a professional networking site... LinkedIn influencers are mostly inspirational people for businesses, careers, and other professional areas.

And you need to follow them. Why? Here are some reasons... 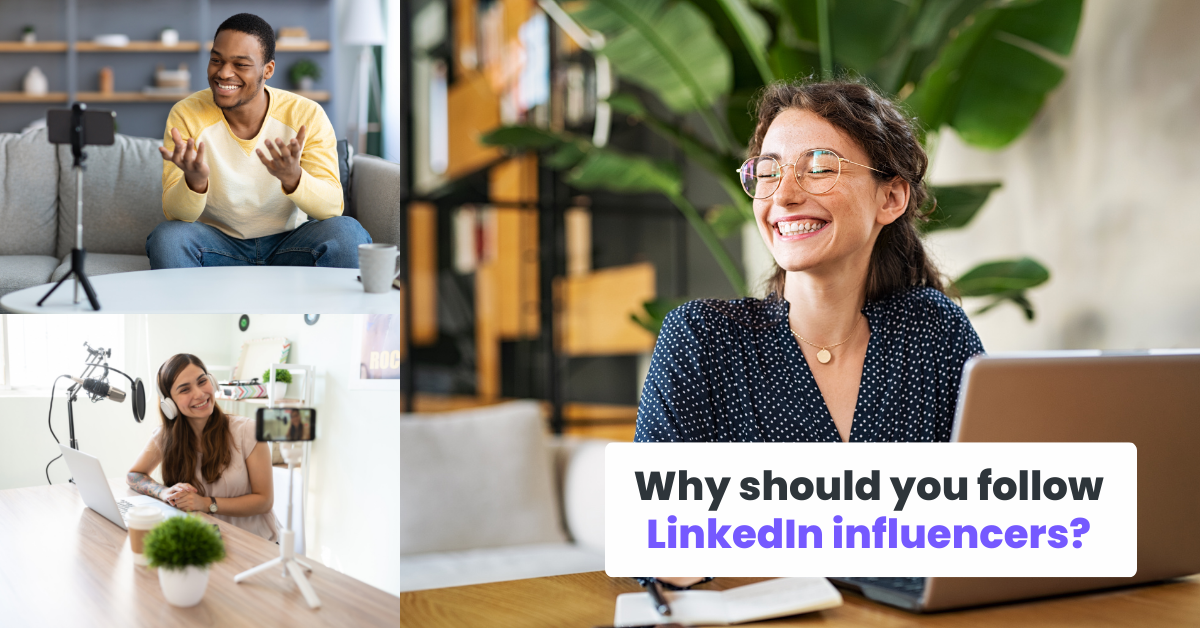 1. Find people to engage with

LinkedIn is a community-driven platform. Almost everyone is there to network and connect with relevant people in the industry.

And through connecting with an influencer, you can find relevant people in the industry. Or at least others who have the same interest.

For example, you're following a CEO in the eCommerce industry. By connecting with them... you will discover some of their colleagues and followers.

That is a good thing, especially if you want to generate more leads or just genuinely connect with those people.

Another reason is you can...

2. Learn from their experience

One of the best things about LinkedIn influencers is they're not gatekeeping information... unless it's confidential for their business. But most of them are transparent in their personal experiences.

And what's a better way to learn than the business magnates, CEOs, founders, venture capitalists, or human resource experts themselves... right?

3. Network with those influencers

Imagine networking with the people you look up to... That feels amazing. And we all know how important networking in running a business and job hunting is.

So, networking with them is probably one of the best benefits of engaging with LinkedIn influencers.

Now, are you ready to know who are the... 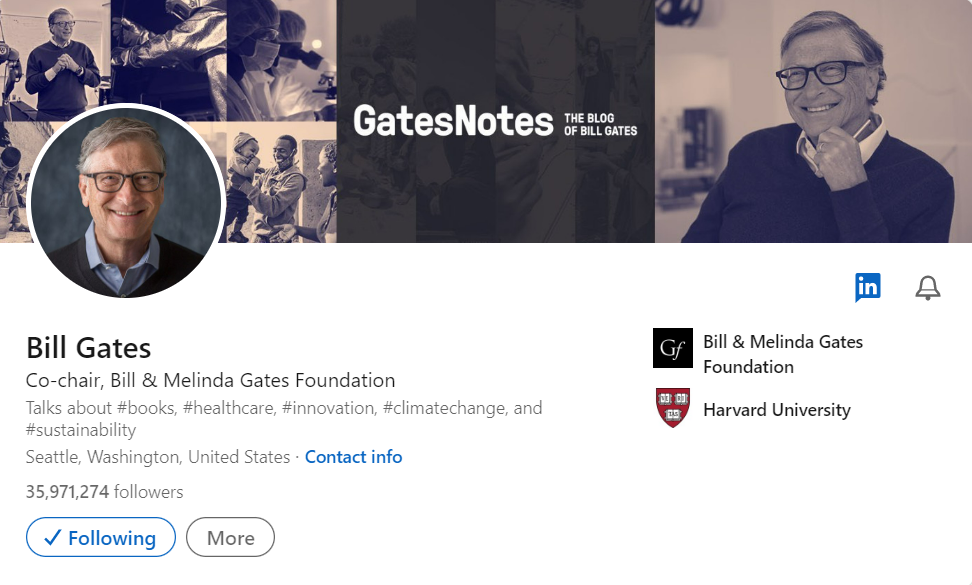 Bill Gates co-founded Microsoft with Paul Allen. And Microsoft Corporation is the parent company of the social media platform LinkedIn.

He actively shares his healthcare and climate change advocacy on his LinkedIn account. He also talks about books, sustainability, and innovation.

And as we all know... Bill Gates is one of the most successful entrepreneurs in the world. A lot of entrepreneurs look up to him. 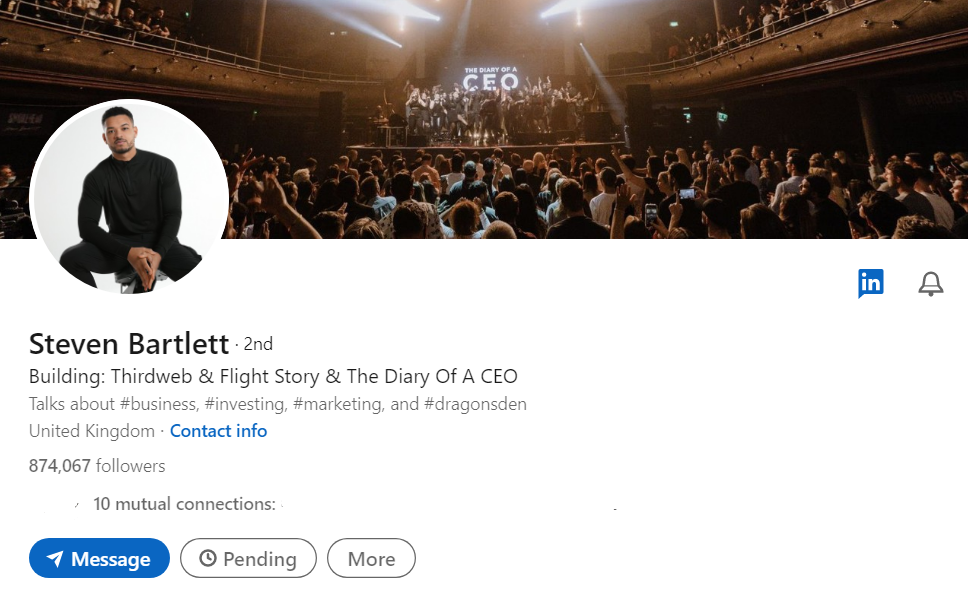 Steven Bartlett is a British businessman and author of Happy Sexy Millionaire: Unexpected Truths about Fulfillment, Love, and Success.

He founded Social Chain in 2014 before building his new ventures, Thirdweb and Flight Story. This proves that Steven Bartlett is a serial entrepreneur you should follow.

If you're interested in learning Web3 and need some PEP talk for your career... he's the right guy to follow. He also has a podcast called The Diary of a CEO. 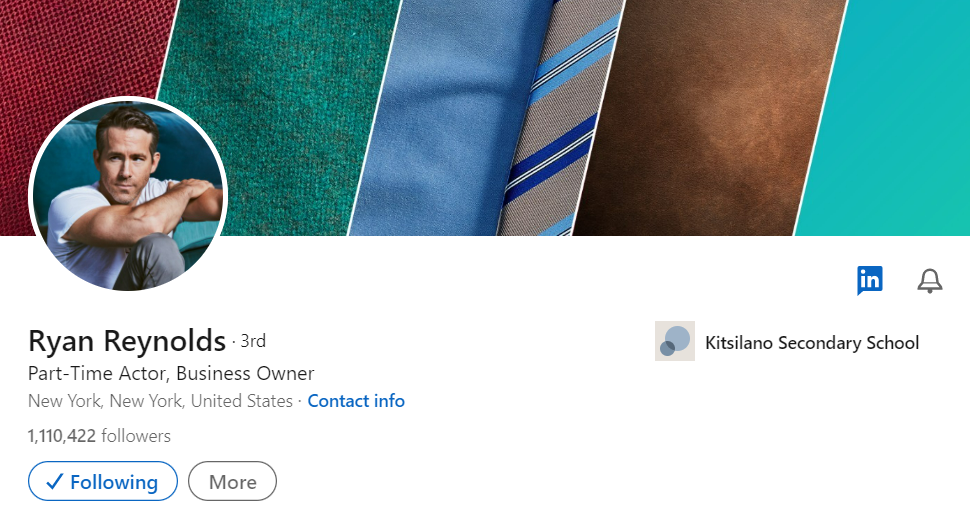 When you hear the name Ryan Reynolds... the first thing that comes to your mind is probably Deadpool. If not, some of his other popular films.

But Ryan Reynolds is one of the social media influencers you must follow on LinkedIn. Why? As his bio says... he's a part-time actor and business owner.

According to his LinkedIn experiences, Ryan Reynolds is a part of 7 businesses in various industries. Owner, Co-Founder, Co-Chairman, and Chief Creative Officer are some of his positions.

His credentials speak loud. If you haven't yet... make sure to give him a follow. 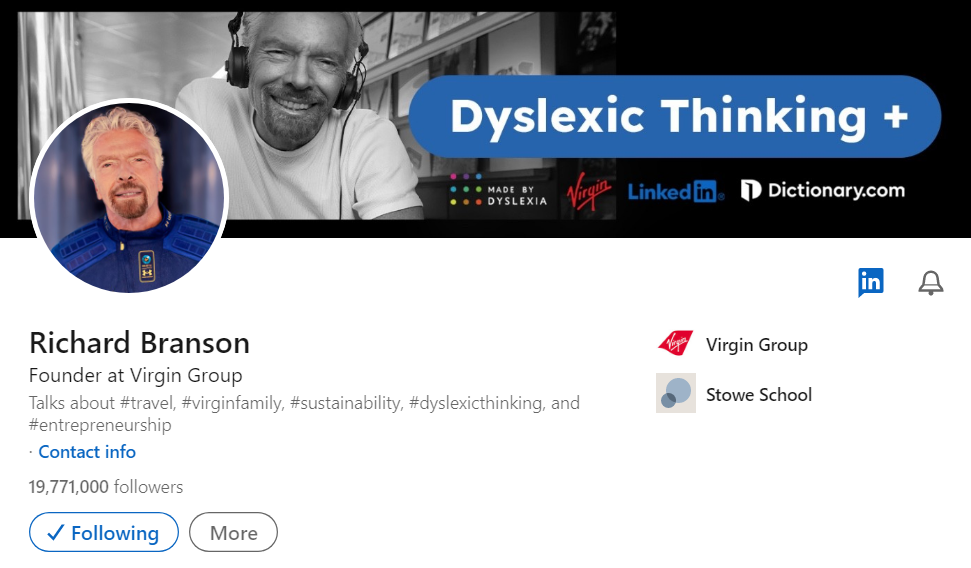 Richard Branson is the founder of the conglomerate company Virgin Group.. which has a lot of successful businesses in multiple industries, like finance, entertainment, and travel.

He likes talking about travel, sustainability, entrepreneurship, and Dyslexic thinking. He also shares snippets of his Virgin family.

Because of the success of Virgin Group, it's no surprise that Richard Branson is a LinkedIn influencer you need to follow. 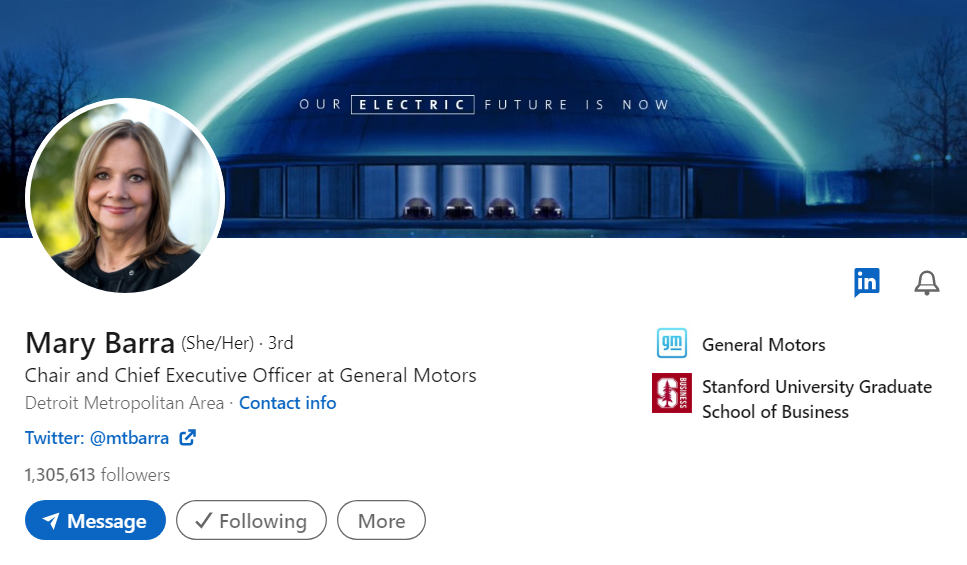 She posts updates about what General Motors is up to. And recently, she was included in Fortune's 50 Most Powerful Women.

If you want to thrive in your career and business as she does... make sure to give her a follow. If you're into marketing... you've probably heard of Gary Vaynerchuk. He's one of the most famous marketers and thought leaders. He talks about digital marketing and social media marketing.

But that's not all. He's a part of and runs multiple businesses and projects, like VeeFriends, VaynerX, Empathy Wine, and Resy. He also talks about business, entrepreneurship, investing, and NFTs.

Did I also mention that's he a New York Times Bestselling Author? So, if you're in for some actionable advice for your business, social media channels, and digital strategy... follow him. Running a successful business doesn't end with learning about entrepreneurship because you also need to be a great leader.

He ensures that people in workplaces are inspired and leaders manage their businesses and people properly by providing coaching services.

Want to see his posts about leadership? Follow him on LinkedIn. 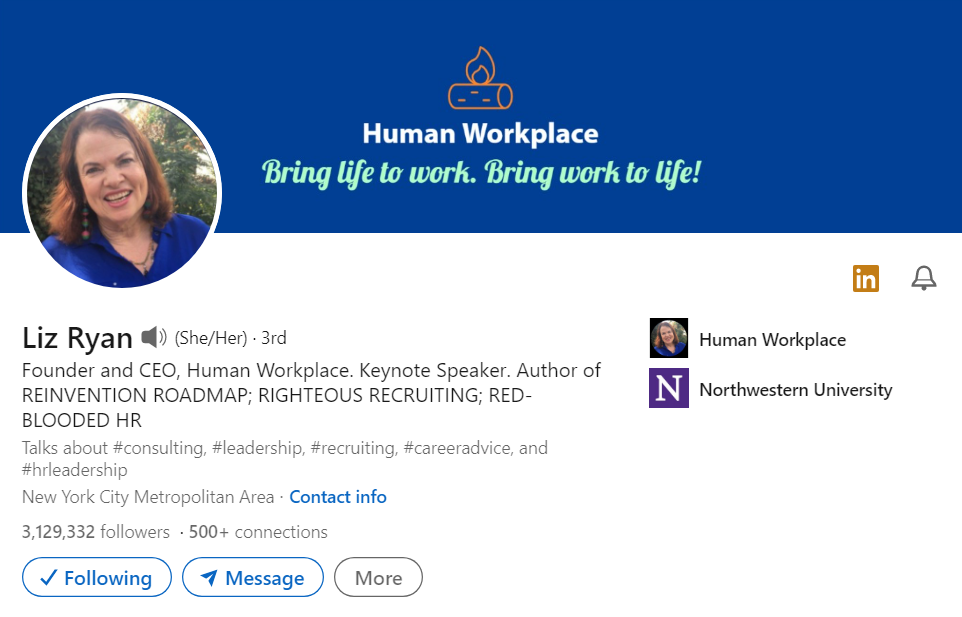 Liz Ryan is the founder and CEO of Human Workplace. It's a firm that coaches job seekers, people in the job market, entrepreneurs, and leaders.

Her company doesn't just help businesses in talent acquisition... but also job seekers who aim to change their careers and get their dream jobs.

Make sure to check out her profile! 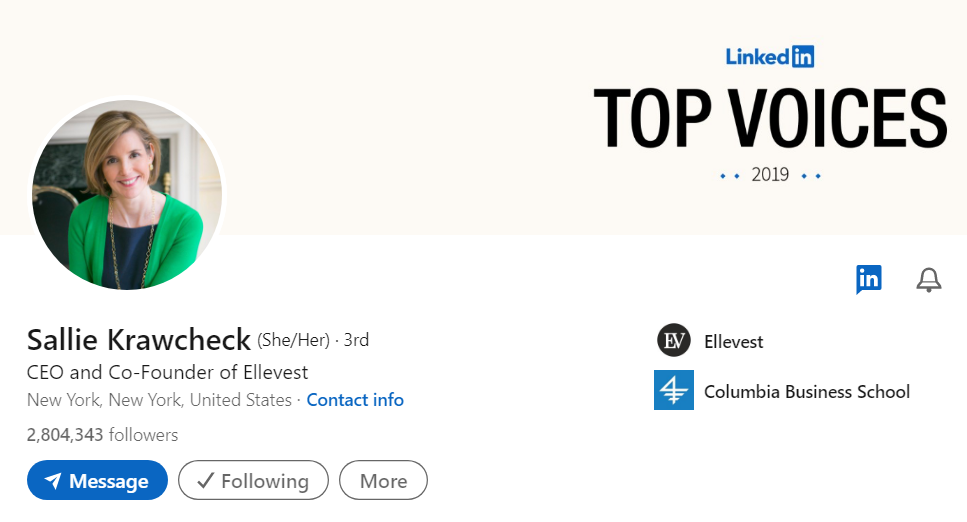 Sallie Krawcheck is "the most powerful woman on Wall Street." That's fantastic, right? She's the CEO and Co-Founder of Ellevest.

Ellevest is an investment and financial literacy platform essentially for women. So, if you're in the mood for some girl power... Sallie Krawcheck should be one of the top LinkedIn influencers to follow.

Have you ever heard of the term "Girlboss?" If yes, Sophia Amoruso popularized that term in her book "Girlboss." It's also a community for women who want to thrive in their careers.

Also, "Girlboss" became a TV series. But she really is a boss... because she founded Nasty Gal, a fashion company that started on eBay.

It had a 300 million USD in revenue in 2015. She also became a part of Forbes' Richest Self-Made Women.

Now, Sophia Amoruso is the founder of Business Class. She's also an investor in multiple companies. If you aspire to be like her, give her a follow! 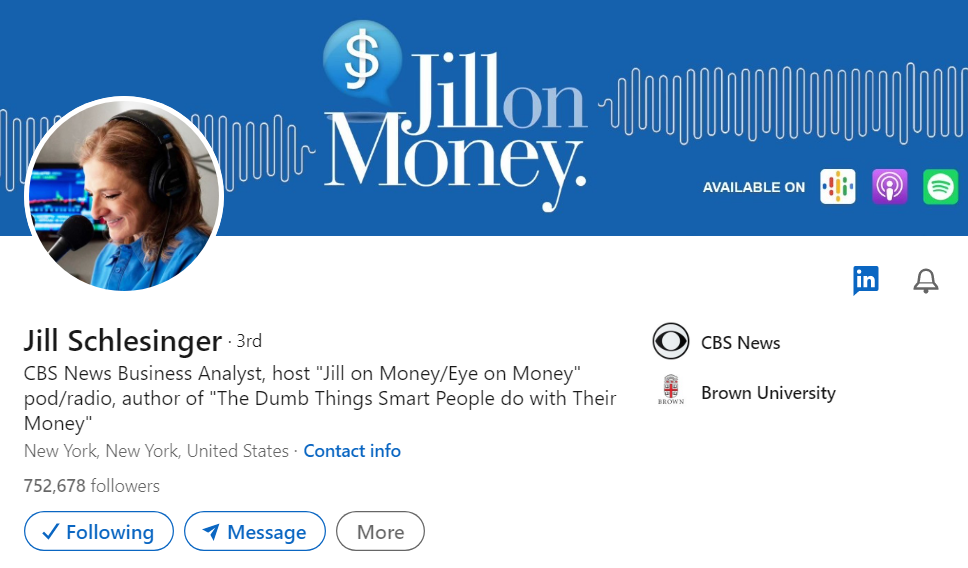 Another powerful woman on the list is Jill Schlesinger. She is a business analyst at CBS News and hosts the podcast "Jill On Money." Also, the author of the book The Great Money Reset.

Jill Schlesinger loves educating others about handling finances, investments, and inflation. These topics are essential to know to be financially secure. So, follow her to learn more.

But let me ask you this... what did you learn about these people?

Don't be afraid to build your personal brand as a business owner!

Social media management is not just perfect for your business. So is influencer marketing. Why? Because you need to learn these two to build a personal brand.

And building a personal brand allows you to introduce your business to more people. Not only that, but they'll get a glimpse of who you are as a business owner.

Lucky for you... because LinkedIn is there. It's one of the best social media platforms to build your personal brand. It's also a great platform to generate leads and...

Find your ideal clients on LinkedIn!

Boost Your Social Proof With Debutify For Free!

User-Generated Content Marketing How To Encourage eCommerce UGC For Your Business And 5 Brand...

Reviews How To Add Reviews On Shopify (And How To Collect And Manage...