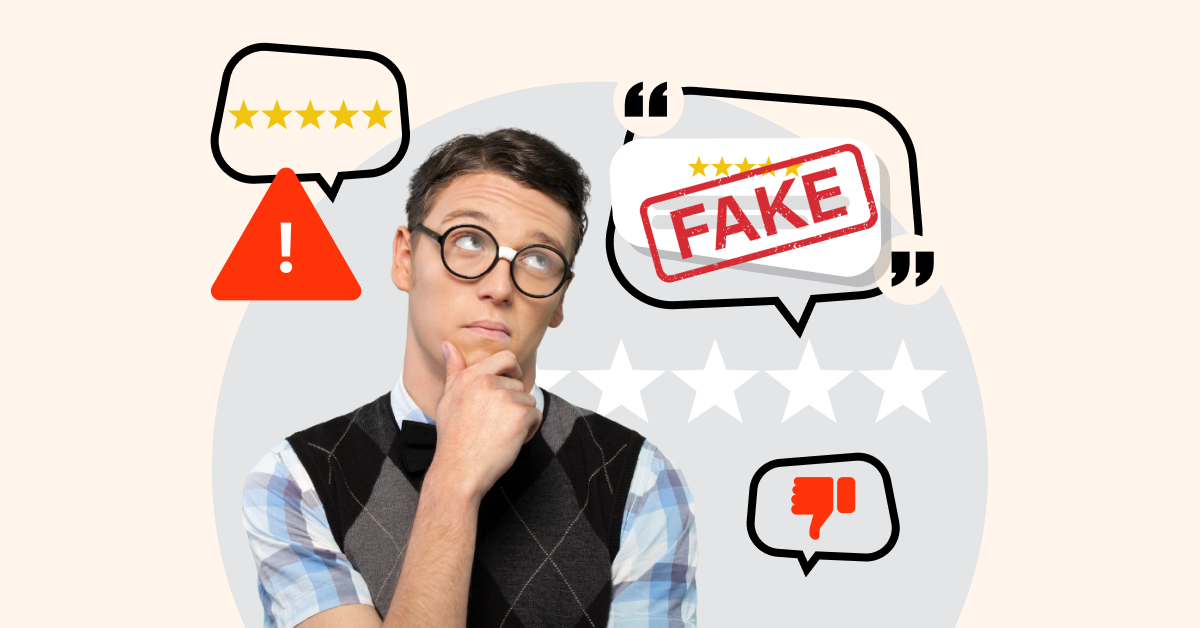 200000+ Stores Are Selling Big With Debutify. What About Yours?

Debutify takes guessing out of the equation. Build a high-converting store with confidence. 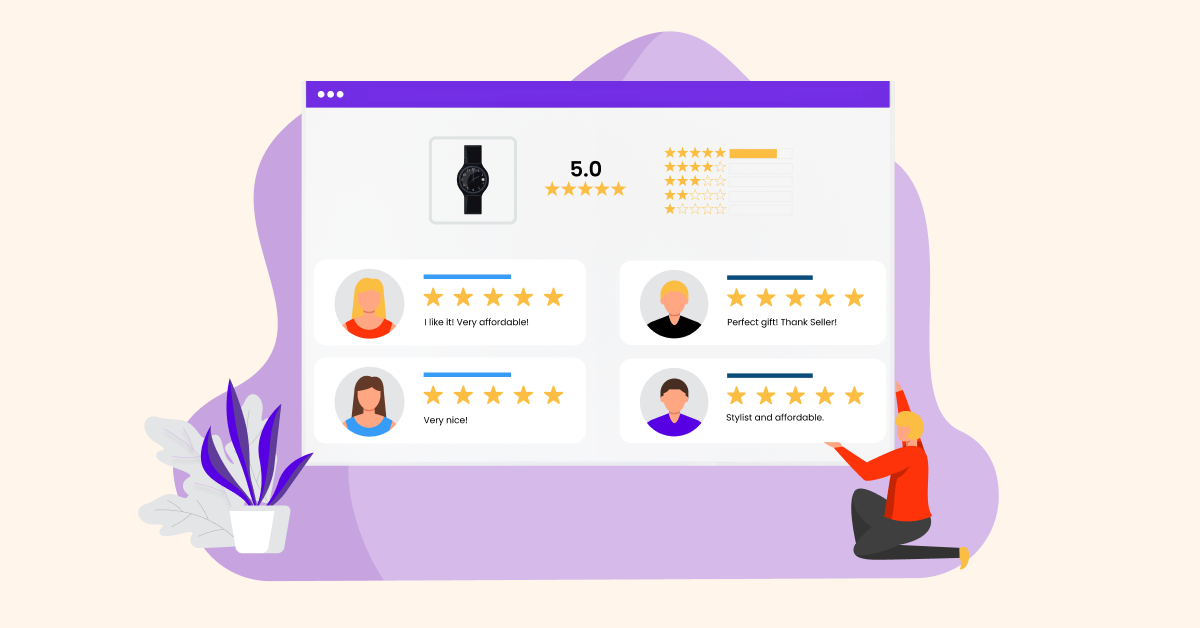 Your product ratings are flawless!

All of those five-star ratings. No negative reviews in sight, too!

But there's just one thing wrong with this picture... All of the reviews are FAKE!

And sadly, some eCommerce businesses are desperate enough to fake reviews on their Shopify store.

Posting fake reviews may give you short-term success on your conversion rates.

You'll only take unnecessary risks for your eCommerce business.

You're about to read what fake Shopify reviews are, and how Google deals with a Shopify store that posts ones.

Warning: It's not good at all!

What Counts As A Fake Review?

Fake reviews are reviews from a person or a group of people that have no actual experience with the product or service.

This includes reviews from users who are paid to leave glowing reviews. Some are also offered free products to write fake positive reviews. In some cases, they are also asked to write negative reviews for competing brands.

The first one is that it makes the brand look good.

Fake positive reviews can go a long way when it comes to convincing customers. This can increase their sales and boosts their business above their competition.

The second reason is that fake negative reviews can ruin other businesses' credibility.

Brands would source negative reviews for their competitor's product or service. These fake Shopify reviews are meant to bring them down and make their own brand look better.

Fake reviews may seem like a good idea at first. But fake accounts aren't as easy to hide from Google as they seem.

Monitoring fake reviews is one of Google's priorities. Here's how they do it...

How Does Google Detect Fake Reviews? 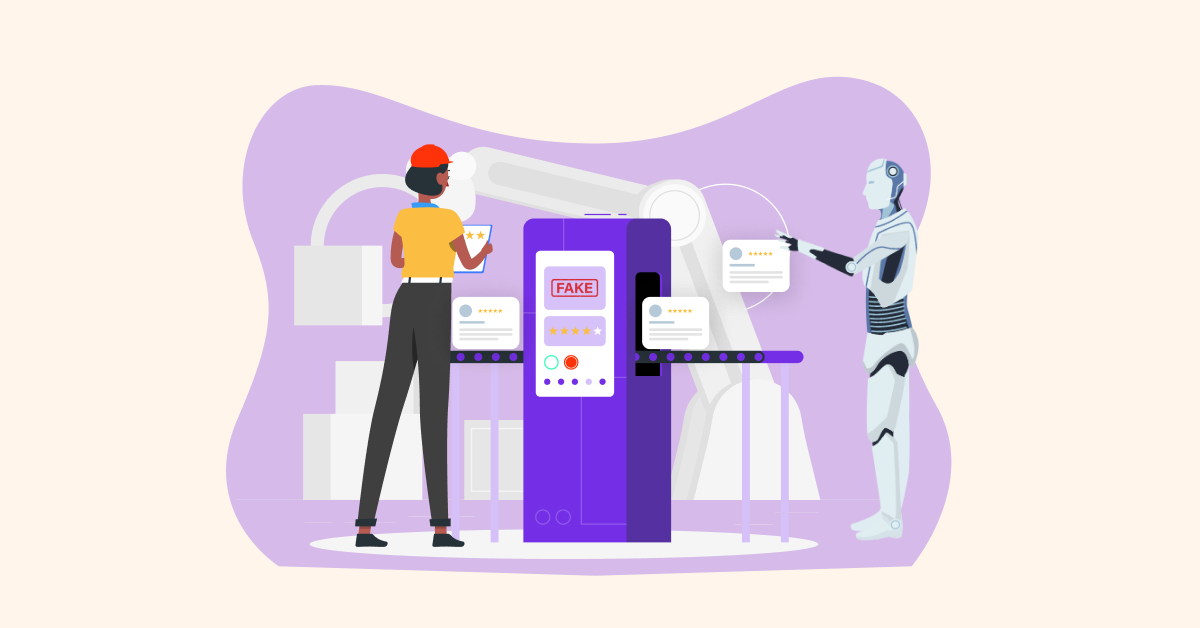 How do they do this?

For instance, users leave reviews and ratings at places they visited. Google utilizes these data to gather legitimate reviews from fake ones.

So, how do they penalize fake Shopify reviews?

Their algorithms detect and eliminate the content that violates their policy. It's either removed by automated models, or they flag it for further review. The user account also goes with the review.

But sometimes, fake reviews can go under Google's radar.

That is when they employ human analysts.

Google's algorithms can have a hard time understanding other aspects of fake reviews. Human moderators and analysts then take over.

For example, algorithms cannot understand local slang from various languages. The analysts go over what the machine did not catch.

For security reasons, Google has yet to open up more information about their human analysts.

And that's how Google gathers reviews and sorts through each one.

How Google And Shopify Feel About Fake Reviews?

Google customer reviews and Shopify reviews can make or break your business. But fake reviews hurt brands like yours as you can...

As an eCommerce brand owner, you know how crucial it is to rank high on search engine results pages. It's one of the most important aspects of high click-through rates.

When Google detects fake reviews on your store, your brand can experience a sharp decline in your ranking. They can remove your brand from search results.

Once that happens, you will miss out on the organic search.

2. Get Your Brand Banned

You might think that losing ranking can be the worst thing that can happen.

Google can ban you from its platform entirely.

You see, fake reviews mean you are violating Google My Business policies. They can remove your content, suspend your account... or revoke your Business Profile ownership.

However, brands can still use Google ads as they currently don't have advertising penalties.

But Shopify also has its own policies on fake reviews.

For Shopify store owners reading this, consider this a warning as Shopify can...

3. Entirely Shut Down Your eCommerce Site

Getting fined for hosting illegitimate reviews is one bad thing.

But the worst consequence of using fake reviews is that your online store can be shut down.

Shopify's Terms of Service clearly state that they are against fake reviews. They can close down your store any time if they find you...

You can clearly see how fake reviews can hurt your brand identity. It can also affect your future customers' perception of you.

Here are other disadvantages you need to know... Your brand's valuable feedback should always come from real customers. Hearing negative feedback may not be what you like, but faking positive ones can...

The Federal Trade Commission created an act to protect consumers.

If they catch you using fake reviews, they can cost you a hefty fine.

For instance, the FTC fined a weight-loss supplement retailer with a whopping $12.8 million. They were caught creating fake reviews to make the brand look better.

The FTC may not fine you the same amount. But the fine you have to pay can still severely affect your business' finances.

Google, Shopify, and the FTC are not the only ones who can sniff out fake reviews.

Shoppers realize real reviews from fake ones more than you know.

5. Consumers Can Figure It Out Anyway

Look, customers in today's world are smart and savvy.

They have a lot of tools in their hands to detect fraudulent reviews.

Plus, real online reviews are valuable feedback. Without it, you won't be able to learn more about your eCommerce business.

Consider this: You won't be able to know what's working and what isn't.

With no real customer experience (yes, even negative feedback), then you can't improve your brand reputation.

And when you don't improve anything, customers will leave truly negative reviews on your site.

To give you a better idea, here are real-life scenarios where phony reviews left on brands get caught...

The FTC alleges the skincare brand posting illegitimate reviews on Sephora's website. They meant to boost their sales through it.

Even more, their CEO and founder told her staff to "dislike" negative reviews so they can get hidden.

As a result, Sunday Riley settled an agreement with FTC. It includes them agreeing not to post more fake reviews in the future.

Another example of this is...

Nine car dealerships had to pay a settlement of $3.6 million. They misled customers with misleading ads and bogus reviews.

The FTC found at least 13 five-star Facebook ratings for one of the stores. They were all posted by the company itself or their agents.

The car dealers also agreed to stop using deceptive tactics in the future.

False reviews are not only seen and caught by Google or Shopify. The FTC, and even your customers, can see right through the façade of it all.

What I'm trying to say is, phony reviews mean...

No More Customers, No More Revenue!

Growing your presence on Google and Shopify means you have to gather reviews. And get them from real, existing customers!

Fake reviews can only do more harm than good.

If you want to have more reviews, then there are other legitimate ways to go by.

And look out for what Debutify is about to launch for your social proof! You won't have to fake anything, too. ?

Another way to get good reviews is by giving your customers an awesome user experience. No customer wants a super slow, unappealing site.

Thankfully, you're in good hands with Debutify! It's not your run-of-the-mill Shopify theme; it's also your Profit Optimization Partner!

With over 50 Add-Ons, you can increase conversions and improve AOV.

Bulk up your reviews...

Boost Your Social Proof With Debutify For Free! 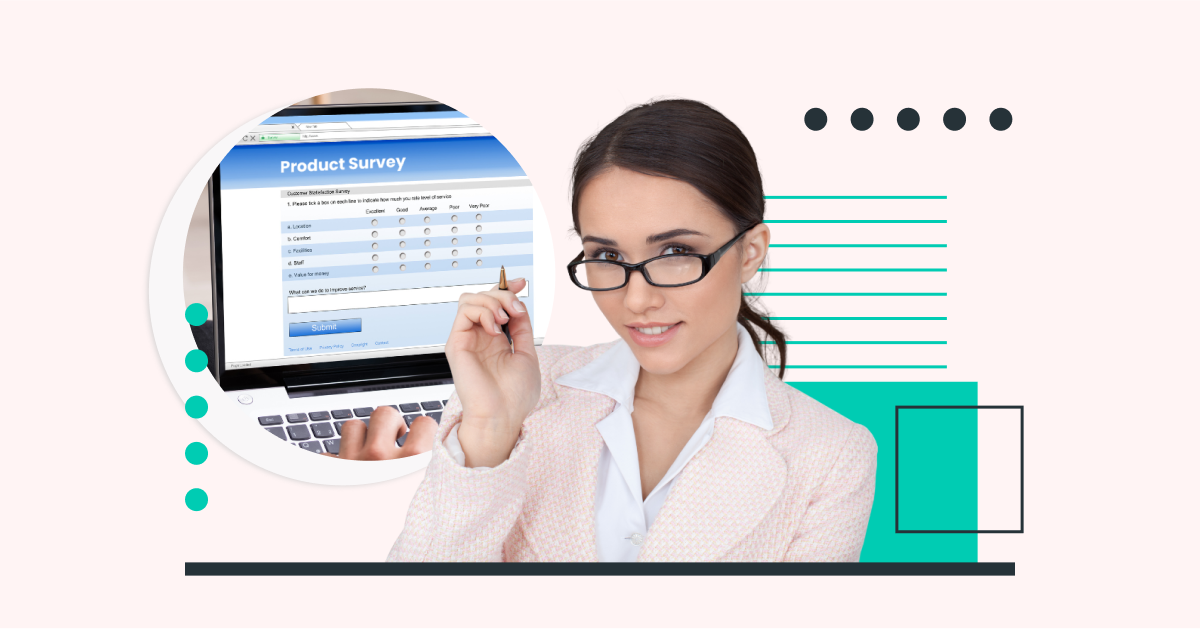 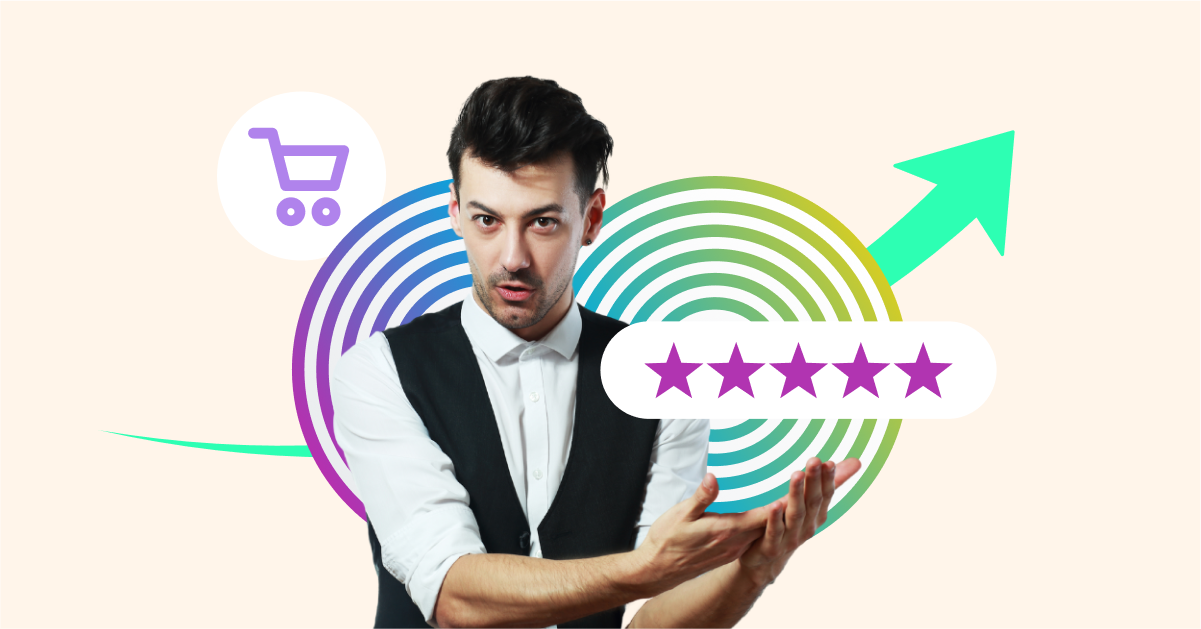 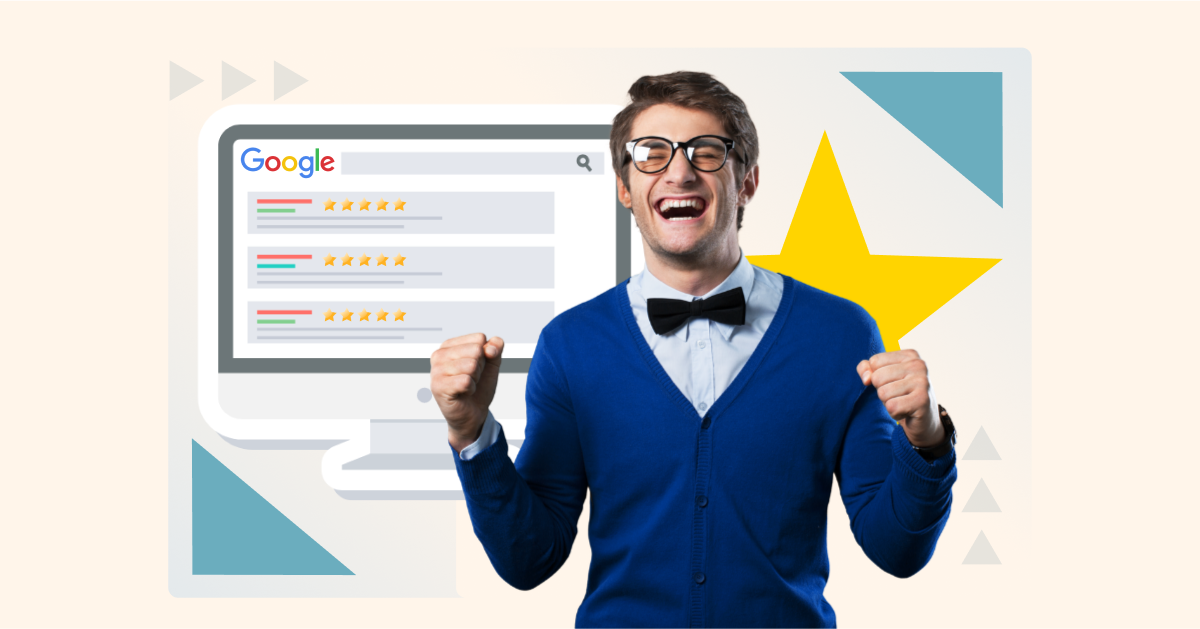 Join the ranks of smart ecommerce owners. Launch a wildly successful store today, only with Debutify.